In our school, we hold to the understanding that martial arts, by the definition alone, have been around for as long as mankind has walked the Earth.  We believe that during mankind's history, certain events have occurred that have helped to spark a major development in the growth of martial arts, or have served as a milestone in the development of some particular aspect of a martial art.

One of the first notable events in mankind's history is that of the travels of Bodhidharma, sometimes simply referred to as priest Dharma (dar-ma).  This Buddhist monk was also a prince from India.  His Buddhist teaching allowed him the opportunity to travel to China.  It was there in China that Bodhidharma met and began to teach the Shaolin Monks.  He found that while their constant meditation and prayer had helped them to develop spiritually, their lack of physical activity has caused their bodies to deteriorate.  Having been a member of India's warrior class, Bodhidharma used his training to develop a series of exercises to help strengthen the bodies to the monks.  These exercises would continue to develop and become the foundation for what is often times referred to as Kung Fu.  All of this would have occurred in the Hunan province of China around 526 AD.

Staying with this belief system, we show that India had a major influence on the martial arts of China. 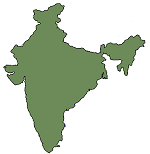 China would continue to develop their martial arts for hundreds of years.  During this time, other neighboring countries would also begin to develop their own notable forms of martial arts.  Probably the most well-known of these were the samurai of feudal Japan.  Like the knights of the European nations, these samurai would be warriors that fought for their rulers in large battles for control of land and honor.  This warrior class would come into existence during the 12th century, and last until the late 19th century.  During this time, several developments would be made in armed and unarmed combat.  These developments would lead to the creation of several forms of martial arts, most notably jiu-jitsu, kendo, iado.

Another area of interest for practitioners of Karate-do is the island of Okinawa.  Okinawa is commonly known as the birthplace of Karate.  Several historical events help to set in motion the development of Karate in Okinawa.  In the late 1300s, a community of Chinese citizens were sent to Okinawa in the form of a colony to help establish and maintain friendly relations between Okinawa and China.  These Chinese immigrants had a large influence on the development of martial arts on Okinawa.  Another event that helped the development of Karate was the unification of the three kingdoms of Okinawa by King Shoshin during the late 1400s.  During this time, a ban was also established barring the use of all forms of weapons by the general citizens of Okinawa.  Following this time period, around 1600 AD, the Japanese Samurai would invade and occupy Okinawa.  They would continue the ban on weaponry.  These time periods would cause the early practitioners of Karate to be forced to put more of an emphasis on empty hand and unconventional weaponry until their training regimens.

Staying with this belief system, we show that China had a major influence on the martial arts of Okinawa and indirectly on those of Japan.

It is now the 20th century (1901-2000 AD).  As we progress toward the new millennium, we find the Chinese government secluding themselves from many of the nations of the world, making it somewhat difficult for all of the martial arts of China to spread throughout the world with the same speed as other more prominent martial arts.  We find the Japanese / Okinawa arts to have a strong foot hold on the world at large, with karate being the most prevalent of these arts.  Finally we find Korea, which has embraced its national martial arts practitioners and banded them together under one style of martial arts known as Tae Kwon Do.  This art is presented as the national sport of Korea and begins to surpass karate as one of the most prevalent martial arts in the world.

For our style, we are primarily focused on the life of two individuals.  One would be my first TAI instructor; O'Sensei Virgil D. Kimmey.  The second would be O'Sensei Kimmey's instructor and my second TAI instructor, Grandmaster David German.  Both gentlemen were 10th degree black belts in the TAI martial arts system.  Both spent a great deal of their life teaching and training in the martial arts.  Both have had a very great impact on our style and my life. 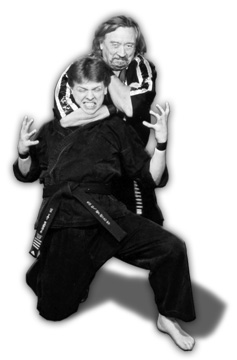 His style would continue to grow and develop and would eventually stretch to other parts of the country and world.  Another black belt, Sam Champan, would later introduce Mr.German and Mr. Kimmey.  This would help cement TAI in our area for decades to come. 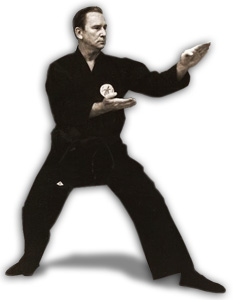 O'Sensei Virgil Kimmey was a man who grew up during the depression.  He childhood was burdened by things that many of us have never experienced.  He grew up during a time in our history where many in the United States of America were dealing with starvation, poverty, abuse, crime, and despair.  The time in his life helped to mold him into the strong and stoic adult he would become.  His first exposure to martial arts would be seeing members of the Chinese laundry that he worked for practicing their art behind their building.  To escape this hard life, he would lie about his age, and join the military.  He would end up overseas in Europe and Germany, fighting for his country in World War II.

After returning from the war, he would end up joining a Shorin Ryu Karate class taught at a local YMCA.  He would train there under two brothers.  He would progress thru the ranks and begin assisting with classes.  As he approached blue belt, the first brother would end up moving away and stopped teaching at the school.  Before too long, the second brother did the same.  Mr. Kimmey kept the classes going and continued his training, but having not earned a black belt yet, he knew he would need to seek out further training.

He found this is a Korean national named Kim Soo-Jin.  My. Kimmey helped bring Kim Soo-Jin to the United States and worked to get him citizenship.  All the while he trained in his style of martial arts; Moo Duk Kwon.  Mr. Kimmey would continue his training with Soo-Jin until a falling out between the two would cause him to separate from the style and begin teaching on his on once again.

Mr. Kimmey would begin working with and teaching the Zen Shoto Kai style for many years, before finally meeting David German.  They were introduced by a common friend, Sam Chapman.  Mr. Kimmey would train regularly with Mr. German and would rise to be one of the highest ranked members of the system.  During his tenure with US TAI Karate, he would become the East Coast President and also represent the TAI system in Europe as well.